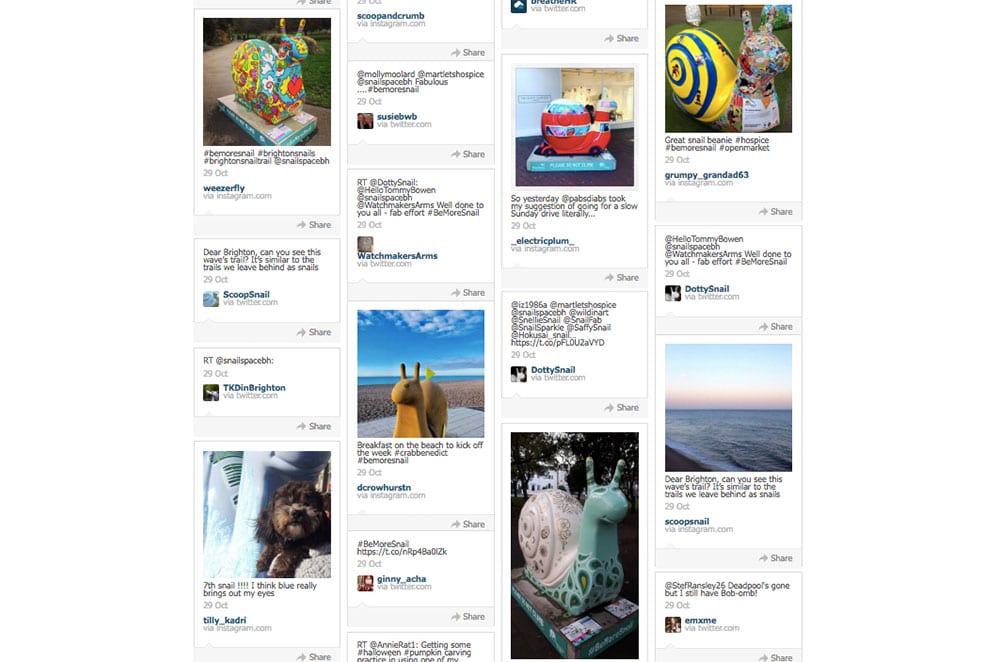 They’re colourful, larger than life and have attracted plenty of admirers since appearing across the city early this autumn. The Snail Trail slithered in Brighton after much anticipation following last year’s successful SnowDog campaign – the brainchild of a local hospice charity, Martlets. The hashtag #BeMoreSnail has been used to relay the importance of slowing down in our busy lives and taking the time to open our eyes to things that make us smile. The 50 adult and 50 mini snails are spread out around Brighton and Hove and will stay until the end of November, each one decorated by a local artist and sponsored by a Brighton-based business.

A new age of fundraising

This idea could have stayed happily on the website, but Martlets took things one step further to spread the word, launching a successful digital campaign spanning Instagram, Facebook and Twitter – with some of the snails even boasting their own Twitter profiles! #snailbants :-).

By encouraging the use of the hashtag, the campaign has gone viral in the South East, allowing people to compare snail pictures, explain how they have been living ‘more snail’ and has even attracted the support of local celebs such as Fatboy Slim who has been snapped around the city visiting the snails.

The snail sponsors and local artists have joined in the fun online, promoting the campaign and drawing attention to their snails on the trail. The coverage created has helped to promote the many local fundraising events happening across Brighton and Hove to raise money for Martlets who support those with a terminal illness and their loved ones.

Digital platforms are hugely important for creating a buzz across the community and getting an audience involved in important campaigns. Hashtags are a great way to keep tabs on the conversation across different social platforms, and by creating a microsite, it’s easier to analyse the traffic coming into the specific campaign pages.

Our team at Creative Blend have been working on a similar initiative set to launch in Surrey and Sussex in summer 2019 run by St Catherine’s Hospice. The HeART to Heart community art trail will help to raise money for the hospice by working with local designers and sponsors to create artistic hearts which will be placed along a trail for ten weeks before being shown at an exhibition. As long-term supporters of St Catherine’s on digital we’re thrilled to have had a part in the campaign by building their microsite – ensuring their message is spread loud and clear online.

Microsites allow the event to take on its own personality, for St Catherine’s it’s all about warmth, positivity, and vibrancy. The site allows it to burst with colour, while working alongside the existing brand and many other campaigns. We look forward to supporting the HeART trail in 2019 – you can follow them on Twitter here.